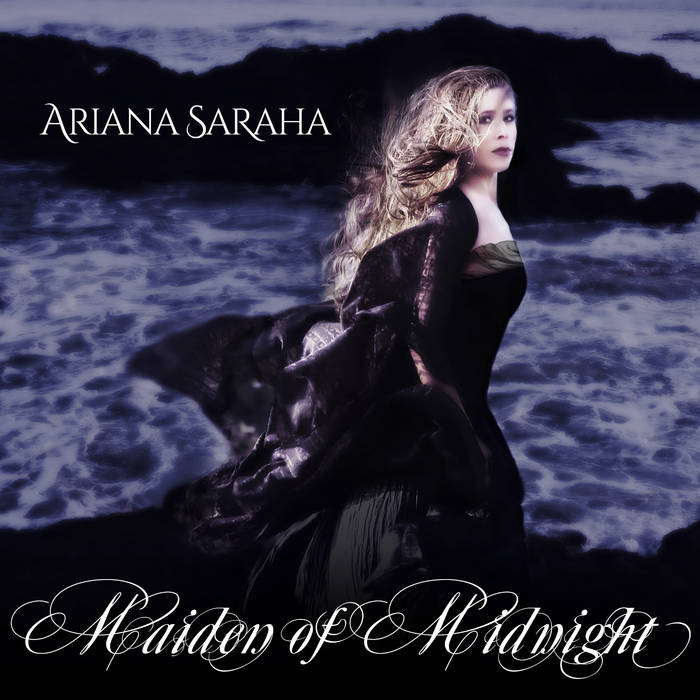 With influences spanning Celtic and Eastern Europe, Spain, the Middle East, and India, Ariana Saraha's debut album, "Maiden of Midnight," is a journey along ancient and new gypsy trails. Co-produced with Dream-Pop songstress Tina Malia and Mideast-music guru Jesse Manno, this debut studio release by a long-touring singer is a well-crafted musical journey that invites the listener to a mystic place where musicians meet beyond borders in celebration and song. Through it all, Ariana’s achingly beautiful and versatile voice reveals a heart that loves this world so poignantly that even through a stormy night she would hold up a light to reveal the beauty hidden under the cover of darkness.

Ariana Saraha is a singer, musician, and songwriter from the wilds of the West with an Old World soul. Most often compared to Celtic singer Loreena McKennitt and alt-world artists Dead Can Dance, she writes, records and performs original and traditional world music with Celtic, Mediterranean, Middle Eastern, North African and Indian influences. ... more

I stood at the edge of the trembling sea
And I cast my prayers to the deep
And I felt the pull of the moon on my bones
Calling me, drawing me home

Ancient woman, maiden of midnight
Sing us your mystery song
And gypsy dancer, of the fire and moonlight
Won't you bring us along

And the sheltering eaves whisper to our souls
Of sacred forests of old
Where we'll find our way to the circle of stones
And there, we will dance our way home

All the way home...
Track Name: The Wind
I heard the cry of Raven
In the wild sky above
for the one who was lost over the ocean
Well don't give up my love
My little dove

So I sent the god of thunder
To break the stormy night
But still, the darkness gathers
So close your eyes
I'll be your sight

(traditional, Hymn for the Russian Earth)
If the people lived their lives
As if it were a song, for singing out of light
Provide the music for the stars
To be dancing circles in the night
Track Name: Desert Blooms
Maybe one day, you and I will leave this place
Let the land return to its original grace
With wild hearts, we will fly
Angels of the earthly sky...
And the desert blooms, in the rain we left behind
Angels of the earthly sky...

Touched so long by the hands of man
Now life grows where the cities did stand
And the winged ones play on the winds through the day
And the rhythm of hooves dancing o'er the plains
Will awaken the thundering earth from her grave
Oh the rivers they will flow from the heart of her pain
She will wash, wash away all the scars that we made
And raise up the mountain as a pillar of praise

For you and I, we have gone from this place
Left the shame of our anguished rage
Left it all, to return again
To the endless sky from which we came

We left our garments by the riverside
We left our homes where we used to hide
We gave our yearning to the ocean's tide
We gave it all, we left it all behind

And we are wild as the wind
As we caress the earth and sky
And we are lovers of this land
And love is all that's left in time... in time

Maybe one day, you and I will leave this place
Let the land return to its original grace
With wild hearts, we will fly
Angels of the earthly sky...
And the desert blooms, in the rain we left behind
Track Name: Phoenix
I sing for the earth
I sing for the angels fallen
Wind is my breath
And thunder is my song

Have you tasted the sweetness of raindrops?
Have you smelled the lilacs in bloom?
Have you seen the sun in a lover's eyes,
And conquered your own doom?

This endless ache of humankind,
The heart of suffering here inside...
There is a warm cave and I have lit a fire
Come sit here by my side.

Together we will sing until the silence falls,
As the flames dance and devour
The dragon's breath on your mortal skin,
Care to join me on the pyre?

Los bilbilicos cantan, con suspiros de amor
Mi neshama y mi ventura, estan en tu poder
Track Name: Kali's Army
Kali's army is coming around
Kali's army is tearing the walls down...
...till I am naked and whole again
Tear me open and scatter me to the wind
Like stardust is shattered and gathered in your breast...
This is no lonely death
For I am coming home...with every breath
Kali Ma Kali Ma Kali Ma Kali Ma...

Wine blood is flowing from my heart to hers
My love is flowing to the heart of the earth...
...till I am empty and full again
Tear me open and pour me out
This love is a river that'll ravage your drought
This is a holy rain
And I am coming home...to heal this pain...
Kali Ma Kali Ma Kali Ma Kali Ma...

And I'm bound in this garden is watered with tears
Turn back ye demons, I've conquered your fears!
Yes I surrender and lay me down...
Tear me open and offer me to the land
Till me under and work me with your hands
I am a warrior, in love again
And I am coming home...to the heart of man
Kali Ma Kali Ma Kali Ma Kali Ma...

Kali's army is coming around
Kali's army is tearing the walls down...
...till I am naked and whole again
Tear me open and scatter me to the wind
Like stardust is shattered and gathered in
Your night sky devours and crushes me to your breast
This is a holy death
Track Name: Into the Void
When the lady's dance is done
And the last song is sung
In a time when mists abide
Inner space where dreams collide...

I'm falling, I'm falling
The blackness is calling
Shadows wrap around
Silence is a mighty sound
Track Name: Raven
Raven is my name
My mother is the wind
Cradled in her arms
Dance together on the breath

Shadows give way
to sight
beyond sight

One eye sees daylight, one into dream
Know that nothing is as it seems

Keep folding in and in and in on the abyss
And there you will find the deep well of bliss
Fathomless
Track Name: Esperanza
We ride on ancient wings
Our hearts awakening
Sacred souls, wild and free,
We are soaring on ancient wings
Awakening, remembering, awakening...

And I sent a prayer that flew to the sky
Touched the stars, and fell to my eyes
Showering, shimmering petals of light
And I, oh I, I am pure delight...

And I watch as the embers fade to grey
And I close my eyes and a light takes shape
Only a spark, a touch of grace
Then a star, my heart aflame
Oh, AngelFire!

Bandcamp Daily  your guide to the world of Bandcamp

Featuring Gary Bartz, 5 years of Rhythm Section Intl and an LP of the week by Nicolas Jaar